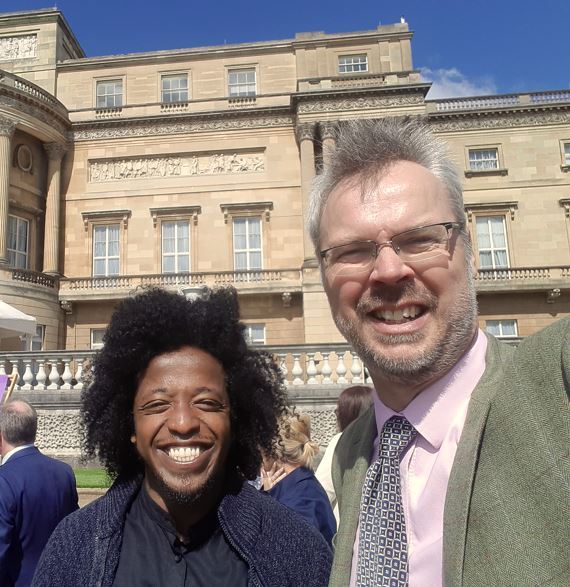 An inspirational Somerset care leaver spent the day at Buckingham Palace last Friday (20 May) to receive the prestigious Gold Duke of Edinburgh Award.

Elias, who spent 3 years in a Somerset foster home before recently moving on to live independently, is believed to be the first Somerset care leaver to achieve a Gold Duke of Edinburgh Award.

6000 young people from across the country attended the presentation, which took place on Friday 20th May in the grounds of Buckingham Palace.

‘‘I felt very nervous in the morning. It was raining and I knew there would be lots of people there, however when we got to Buckingham Palace the sun was out and I was excited. I felt very lucky to be at the Palace and the afternoon was really lovely’’ said Elias

Anyone aged 14 – 24 year old can take part in The Duke of Edinburgh programme, which provides young people with an opportunity to gain essential skills and attributes for work and life such as resilience and problem-solving. There are four main sections of the programme at the Bronze and Silver levels, and five for Gold, which involve helping the community and developing new skills.

It was during his time in foster care that Elias took part in the Duke of Edinburgh programme, achieving his Silver Award in Sept 2019, and his Gold Award in January 2021 – even more impressive when it was completed during the height of the Coronavirus pandemic and lockdowns.

But COVID-19 was only one of the obstacles Elias, now aged 20, had to overcome to complete his Gold Award.

Elias said: “When we were doing the five day residential trip near Snowdon in Wales, it was a bit windy and raining. We walked to check points and did activities like kayaking and coasteering, and had to jump off tall rocks into the sea. I didn’t want to do it at first. I couldn’t swim at the time. It was scary, but I needed to do it so I did, and then after I did it again”.

Elias then went on to learn how to swim for the physical section of his Duke of Edinburgh Award.

”I had a swimming instructor and I learnt to swim, and I’ve now helped teach my friends how to swim.

“I also did cooking. I didn’t know how to cook but I learnt how to cook and made Friday night dinners for my foster carers and foster family. I even made desserts. Yesterday I made a Victoria Sponge cake for my friends where I live now, and they liked it.”

For the volunteering section, Elias gave his time to supporting the children’s charity, Barnardo’s.

Though Elias enjoyed every part of the DofE programme, the Gold Expedition which saw Elias and his group wild camp and walk over 35 miles across some of Dartmoor’s highest points in 4 days, was particularly memorable for him.

“It was really bad weather. Just raining and raining. When we walked up to Yes Tor on the first day, there were Army Cadettes walking back because of the weather, and the Army Officer leading them asked us if we were sure we wanted to stay and camp.

“I didn’t mind the rain too much as if it was sunny it would make you very tired, but then I was tired anyway because I went to bed without even cooking any food one night.

“The difficult bit is putting up a tent when it’s raining and windy. It’s really hard and the ground you’re sleeping on is also wet.

“When we were getting on the bus to go home I said ‘can we walk back again?’ and they said ‘are you mad?’

Elias already has a number of awards to his name, including a Pride of Somerset Award and 2 Shooting Star Awards received whilst studying Maths, English and plumbing at Yeovil College.

David Hamlin, who supports Elias on a one-to-one basis as an Independent Visitor through Route One Advocacy said: “He doesn’t realise what he’s achieved, or how much effort he’s put in. Only a small percentage of participants who begin their gold award will go on to complete it. It is such a massive achievement’’.

In David’s working life he is an Operations Officer for Somerset County Council.  The Council support over 60 centres that deliver the Duke of Edinburgh, David’s role is to actively encourage and support participation in the awards from disadvantaged children and young people.

“Elias has overcome so many obstacles to achieve his Gold Duke of Edinburgh Award, and with every challenge his attitude has been nothing but positive. He’s learnt to cook, learnt to swim, showed resilience and determination, and shared a lot of his new skills with others which is a wonderful thing to do.

“He is quite the baker now! He makes bread and cakes, and I know his foster family miss his Friday night Lasagne he used to cook for them. It was his signature dish!

“It’s really amazing to see how Duke of Edinburgh, and fostering, can really help to transform a young person’s life and what they can achieve,” added David.

Elias spent 3 years with Somerset Foster Carers, Elaine and Ian, who are both ‘’incredibly proud’’ of him, with Elaine having an MBE to her name for recognition of her services to fostering Unaccompanied Asylum Seeking Children in Somerset.

Elias still keeps in touch with his foster family and encouraged his foster brother to take part in the Duke of Edinburgh.

“I told him you should do it. You will learn new and different things,” said Elias, now living independently in London, where he hopes to build a career and home.

“I would say to everyone you should do Duke of Edinburgh, and try new things. I have made friends and learnt a lot of new skills.”

Foster carers  receive a weekly fee and allowance for each child in their care, plus a dedicated supervising social worker and on-going training and support.